Background Hispanic/Latino populations are a genetically admixed and heterogeneous group, with variable fractions of European, Indigenous American and African ancestries. The molecular profile of breast cancer has been widely described in non-Hispanic Whites but equivalent knowledge is lacking in Hispanic/Latinas. We have previously reported that the most prevalent breast cancer intrinsic subtype in Colombian women was Luminal B as defined by St. Gallen 2013 criteria. In this study we explored ancestry-associated differences in molecular profiles of Luminal B tumors among these highly admixed women. Methods We performed whole-transcriptome RNA-seq analysis in 42 Luminal tumors (21 Luminal A and 21 Luminal B) from Colombian women. Genetic ancestry was estimated from a panel of 80 ancestry-informative markers (AIM). We categorized patients according to Luminal subtype and to the proportion of European and Indigenous American ancestry and performed differential expression analysis comparing Luminal B against Luminal A tumors according to the assigned ancestry groups. Results We found 5 genes potentially modulated by genetic ancestry: ERBB2 (log2FC = 2.367, padj<0.01), GRB7 (log2FC = 2.327, padj<0.01), GSDMB (log2FC = 1.723, padj<0.01, MIEN1 (log2FC = 2.195, padj<0.01 and ONECUT2 (log2FC = 2.204, padj<0.01). In the replication set we found a statistical significant association between ERBB2 expression with Indigenous American ancestry (p = 0.02, B = 3.11). This association was not biased by the distribution of HER2+ tumors among the groups analyzed. Conclusions Our results suggest that genetic ancestry in Hispanic/Latina women might modify ERBB2 gene expression in Luminal tumors. Further analyses are needed to confirm these findings and explore their prognostic value. 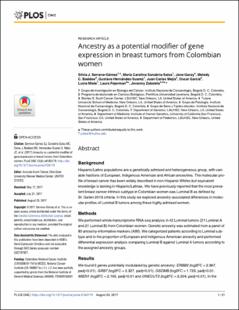