Bilateral Hip Arthroplasty: When Is It Safe to Operate the Second Hip? A Systematic Review

Introduction. Patients with degenerative hip disease frequently present with bilateral involvement that requires surgical management. The main goal when treating these patients is to achieve the maximum efficiency without increasing risk of perioperative complications; therefore, the decision regarding the best moment to operate the second hip becomes relevant. Although studies have addressed this topic, whether a simultaneous or staged surgery should be performed remains controversial. The purpose of this study was to determine, based on available evidence, the optimum strategy in terms of safety to operate the second hip in patients with bilateral involvement. Materials and Methods. A meta-analysis was planned. A systematic review of the literature was performed including clinical trials or observational analytical studies comparing the safety of bilateral arthroplasty performed simultaneously or staged by measuring major and minor complications. The appropriateness of a meta-analysis was evaluated through the detailed analysis of the risk of bias and clinical heterogeneity of the included studies. Results. Thirteen studies were selected after the systematic review. A wide variability in the methodological designs was found with a critical risk of bias in most of them. Considerable heterogeneity was detected in defining staged surgery in the cointerventions and how the outcomes were defined and measured. In response to these findings, a meta-analysis was considered not appropriate. The results showed no differences in the risk of mortality or systemic complications in young and healthy patients between simultaneous or staged surgeries. However, increased risk of complications for staged surgeries performed during the same hospitalization was observed. Conclusions. Available evidence is very heterogeneous and the quality of evidence is low. The available evidence supports the performance of simultaneous hip arthroplasty in selected patients (not older than 65 years, ASA 1-2, without cardiovascular comorbidities) and suggests the avoidance of staged surgeries within the same hospitalization. 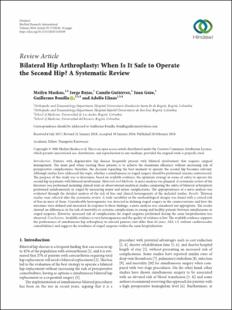