This report is of a 68-year-old male patient with a three-year history of severe, progressive, low urinary tract symptoms (LUTS) with a score of 20 points on the International Symptom Scale. The patient received alpha-1-blocker therapy without adequate response. Transurethral resection of the prostate was performed, and the anatomopathological report indicated the presence of a haematolymphoid small-cell neoplasia and glandulostromal prostatic hyperplasia. Posterior immunohistochemistry evaluation reported an extra-nodal marginal zone-B lymphoma non-Hodgkin lymphoma. The patient was followed up for five years by the urology and oncology departments. In the fourth year of follow-up, the patient had B symptoms (fever, night sweats and weight loss). At the same time, laboratory tests showed haemolytic anaemia; then a new bone marrow biopsy was carried out. The histopathological specimen showed six lymphoid aggregates, constituted by a B-cell population with intra-trabecular predominance and reactivity for CD20 and BCL-2. New thoracic and abdominal computed tomographies were performed without any findings suggestive of extra-prostatic spreading. Subsequently, a chemotherapy regimen was started on the patient with the following therapeutic scheme: Rituximab 375 mg/m2 IV per day, cyclophosphamide 750 mg/m2 IV per day, Vincristine 1.4 mg/m2 IV dose per day and Prednisone 40 mg/m2 on days 1–5 (R-CVP scheme) for 21 days, until he completed six cycles. No signs, symptoms or progression have been recorded. 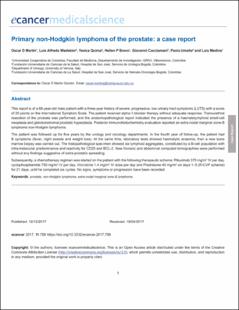