Objective To examine the incidence of preterm premature rupture of membranes (PPROM) in pregnancies affected by twin–twin transfusion syndrome (TTTS) treated with laser photocoagulation where an absorbable gelatin sponge was used as a chorioamnion sealant of the fetoscopic access port. Method A retrospective review was undertaken of consecutive cases undergoing fetoscopic directed laser surgery for TTTS between October 2006 and November 2008 at Texas Children's Fetal Center, in which an absorbable gelatin sponge, used as a chorioamnion ‘plug’, was placed at the conclusion of the intervention as a possible prophylactic measure to prevent PPROM. We excluded cases that had a failure of plug placement and those in which it was not attempted. PPROM was defined as rupture of membranes before 34 weeks' gestation. A comparison was performed between the PPROM group and a no-PPROM group to determine risk factors and outcomes. Results Successful plug placement occurred in 79 of 84 cases (94%) in which it was attempted after laser surgery, with a rate of PPROM of 34% in these patients. PPROM occurred at an average gestational age of 26.5 ± 3.6 weeks, with an average procedure-to-PPROM interval of 5.2 ± 3.5 weeks. There were no statistically significant differences between the PPROM group and the no-PPROM group in maternal demographics or preoperative parameters including: amniotic fluid volumes in the recipient twin's gestational sac, volume of amnioreduction, and location of the placenta. The procedure-to-delivery interval for the total cohort (n = 79) was 9.2 ± 4.7 weeks, without a significant difference between the two groups (P = 0.08). However, after exclusion of one PPROM outlier, the PPROM group had an average procedure-to-delivery time 2 weeks shorter than the group with no PPROM (P = 0.03). The live birth rates were similar in the PPROM and no-PPROM groups, at 77 and 73%, respectively. However, the average recipient's weight in the PPROM group was significantly lower than in the no-PPROM group (1321 ± 493 vs. 1705 ± 576 g; P = 0.02). Conclusion The rate of PPROM and the mean gestational age at delivery in pregnancies in which an absorbable gelatin sponge was used as a sealant of the fetoscopic port following laser photocoagulation for TTTS were comparable to those that have been reported by other laser centers where membrane sealants were not used. A randomized controlled trial should be considered to evaluate the effect of chorioamnion plugging. 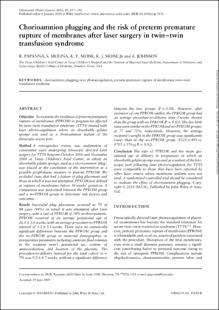