Effect of Montelukast 10 mg in Elderly Patients with Mild and Moderate Asthma Compared with Young Adults. Results of a Cohort Study

Background: The clinical characteristics and physio-pathogenic mechanisms of asthma in patients older than 60 years appear to differ from the behavior described for other age groups. Therefore, the effectiveness of medications for elderly patients with asthma should not be extrapolated from studies conducted on teenagers or young adults. Objective: The study aimed to establish the clinical effect of montelukast 10 mg in elderly patients with mild and moderate asthma compared to its effect on young adults. Method: A prospective cohort study was conducted during 12 weeks of follow-up, which consecutively included the total population of adult patients attended by a group of 21 general practitioners, between July and December 2016. Young adults (18-59 years) and older adults were included (60 years or older) with mild or moderate asthma, which, according to the criteria of his treating physician, had been prescribed montelukast 10 mg/day. The variables of interest were: use of inhaled corticosteroids during the last month, use of inhaled beta-2 adrenergic agonists as a rescue in the last month, having attended the emergency service during the last month due to an asthma attack, presence of wheezing in the physical examination, the number of attacks in the last month and the number of days without symptoms in the last month. Results: A total of 126 patients entered the cohort and 104 completed the follow-up, of which 29% were older adults. On admission, 65.4% of patients (68/104) had used rescue inhaled beta2 in the last month and had been using schemes with corticosteroids. After 12 weeks of follow-up, 58.1% (43/74) of the young adults required treatment schedules with corticosteroids, while in the elderly, only 36.7% of the patients (11/30) required this treatment scheme (p-value: 0.047). Regarding the use of rescue inhaled beta-2 at 12 weeks, 55% of young adults reported using them, compared to 33.3% of older adults (p-value: 0.041). Conclusion: In this cohort of patients, treated with montelukast 10 mg/day for 12 weeks, there was a reduction of broncho-obstructive symptoms and exacerbations of the disease. In older adults compared to young adults, a greater redu 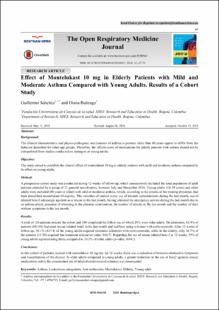