Is it prudent to consent to or recommend pregnancy in breast cancer survivors?

Gynecological and Reproductive Endocrinology and Metabolism

Background: Female breast cancer survivors and some health professionals may have doubts about the advisability of pregnancy after breast cancer. Such doubts concern possible recurrences, increased mortality, and adverse effects on the newborn. Purpose: The aim of this report is to present the case of a woman who, after 48 months of breast cancer survival, wished to start a pregnancy. A further aim is to indicate whether it is prudent to consent to or to recommend pregnancy after a breast cancer diagnosis. Case report: This report concerns a patient without satisfied parity, who, at the age of 36 years, presented left breast carcinoma with negative nodes: estrogen receptors in less than 2% of the studied cells and negative progesterone receptors. She received surgical management, chemotherapy and radiotherapy. At 48 months of survival, she wished to start a new pregnancy. On requesting a risk/benefit recommendation from her treating doctors, she did not obtain a unanimous position. By her own decision, she sought and achieved a spontaneous pregnancy, which led to a live birth. Five years later, her child shows normal growth. Conclusion: Evidence suggests increased survival in mothers with a breast cancer history and subsequent pregnancy. Despite being high-risk pregnancies due to the increased possibility of low birth weight, preterm delivery, and small fetus for gestational age, studies suggest that pregnancy may be consented to or recommended in breast cancer survivors.

Descripción: Artículo
Título: Is it prudent to consent to or recommend.pdf
Tamaño: 127.7Kb 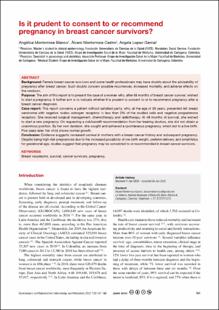