Evaluation of visual function in patients with cataract, amblyopia, optic neuritis, and retinopathies

The Panamerican Journal of Ophthalmology

Purpose: The purpose was to describe the changes in the visual function of patients with cataract, optic neuritis, amblyopia, and retinopathies evaluated at the Hospital de San José, Bogotá, Colombia, between August 2015 and May 2019. Materials and Methods: This is a descriptive cross‑sectional study. One hundred and ninety‑six patients with a diagnosis of cataract, retinopathies, optic neuritis, and amblyopia were evaluated; the tests were performed to determine the visual function (visual acuity, stereopsis, contrast sensitivity, and color tests). Qualitative and quantitative characteristics were described. Results: Of the 196 patients, 17.3% had amblyopia of any cause, 16.8% optic neuritis, 40.8% cataract, and 25% retinopathies of multiple etiologies. Amblyopic patients presented less deterioration of the stereopsis(160 arc seconds), whereas patients with retinopathy presented more significant compromise (400 arc seconds). Patients with optic neuritis showed severe deterioration in contrast sensitivity; in the other pathologies, the decline was moderate. Nearly 42.4% of the patients with optic neuritis and 38% of the amblyopic patients did not present color vision disorders, whereas 32.6% and 31.2% of the patients with retinopathy and cataract showed tritanomaly. Conclusion: Visual acuity is not equivalent to visual function. Stereopsis, contrast sensitivity, and color vision are affected by pathologies such as amblyopia, optic neuritis, cataract, and retinopathies. These assumptions of visual function could be considered for studies that take into account all the factors that may compromise the visual performance and, accordingly, define early diagnosis strategies, in addition to therapeutic behaviors such as performing early cataract surgery and visual rehabilitation. 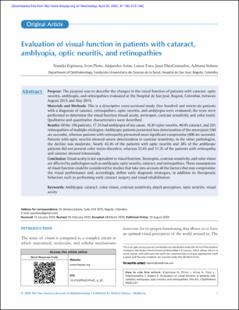