Breast cancer (BC) is a highly heterogeneous disease associated with metabolic reprogramming. The shifts in the metabolomecaused by BC still lack data from Latin populations of Hispanic origin. In this pilot study, metabolomic and lipidomic approacheswere performed to establish a plasma metabolic fingerprint of Colombian Hispanic women with BC. Data from H-NMR, GC-MSand LC-MS were combined and compared. Statistics showed discrimination between breast cancer and healthy subjects on allanalytical platforms. The differentiating metabolites were involved in glycerolipid, glycerophospholipid, amino acid and fatty acidmetabolism. This study demonstrates the usefulness of multiplatform approaches in metabolic/lipid fingerprinting studies to broadenthe outlook of possible shifts in metabolism. Our findings propose relevant plasma metabolites that could contribute to a betterunderstanding of underlying metabolic shifts driven by BC in women of Colombian Hispanic origin. Particularly, the understanding ofthe up-regulation of long chain fatty acyl carnitines and the down-regulation of cyclic phosphatidic acid (cPA). In addition, themapped metabolic signatures in breast cancer were similar but not identical to those reported for non-Hispanic women, despiteracial differences. 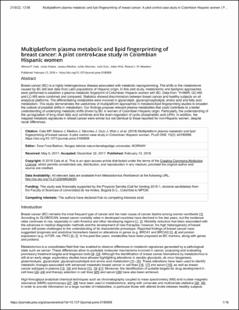