Introduction: The standard treatment for patients with early-stage cervical cancer has been radical hysterectomy. However, for women interested in future fertility, radical trachelectomy is now considered a safe and feasible option. The use of minimally invasive surgical techniques to perform this procedure has recently been reported. Case Description: We report the first case of a laparoscopic radical trachelectomy performed in a developing country. The patient is a nulligravid, 30-y-old female with stage IB1 adenocarcinoma of the cervix who desired future fertility. She underwent a laparoscopic radical trachelectomy and bilateral pelvic lymph node dissection. The operative time was 340 min, and the estimated blood loss was 100mL. There were no intraoperative or postoperative complications. The final pathology showed no evidence of residual disease, and all pelvic lymph nodes were negative. At 20 mo of follow-up, the patient is having regular menses but has not yet attempted to become pregnant. There is no evidence of recurrence. Conclusion: Laparoscopic radical trachelectomy with pelvic lymphadenectomy in a young woman who desires future fertility may also be an alternative technique in the treatment of early cervical cancer in developing countries. 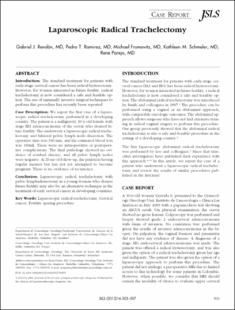