The American Journal of dermatopathology

Regarding the first case report recently published by Navale et al1 about a skin perivascular epithelioid cell tumor (PEComa) with focal melanin pigmentation, we wish to present another exceptional case of a malignant uterine PEComa metastatic to skin and lung, gastric lymph-vascular invasion, and brain dissemination, which was also initially misdiagnosed as skin melanoma because of the presence of epithelioid features and the expression of some melanocytic markers. Our patient was a 62-year-old woman, who presented with abnormal uterine bleeding that prompted hysterectomy 3 years ago. An extrainstitutional pathology report on the surgical specimen revealed a lesion compatible with a uterine leiomyosarcoma that was managed with adjuvant radiotherapy. At the 2-year clinical follow-up, the patient presented with a mass on the posterior region of the neck, which required undergoing surgical excision. The pathology study features were compatible with a malignant melanoma. Other reassessment and follow-up studies evidenced a compromise of the lung, with histopathological diagnosis of metastatic melanoma. A year ago, the patient presented with a new pigmented lesion on the right cheek. Once again, the biopsy study revealed a melanoma. 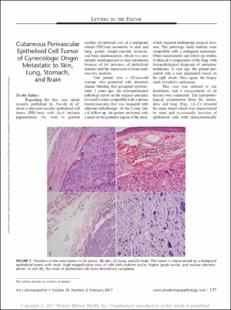