Objectives: To evaluate placental characteristics in relation to perinatal outcome in pairs of monochorionic diamniotic (MCDA) twins in relation to early perinatal outcome.Methods: Between July 2009 and February 2011, 54 pairs of MCDA twins and 2 triplets were delivered in 3 tertiary care centers. All pregnancies were followed with a weekly fetal surveillance for fetal weight discordance and twin-to-twin transfusion syndrome (TTTS). After birth, placentas were observed and stained to search type and number of vascular anastomoses, type and distance between cord insertions and placental distribution. Birth weights as fetal and neonatal mortality and early morbidity were recorded from clinic charts. Placental characteristics were analized in relation to perinatal outcome. Triplets were analized separately. Results: Anastomoses were detected in all placentas with fetal growth alterations in 44% of the studied pregnancies. Between fetuses with growth disturbances 12 pairs were diagnosed as TTTS, 9 pairs as selective intrauterine growth restriction (IUGR) and 3 pairs as growth discordances without IUGR. Eight fetal deaths were recorded, in 2 pregnancies a single fetal death occurred and in other 3 pregnancies both fetuses died in spite of fetal therapy. Relation between abnormal cord insertions and smaller placental territories were seen in all abnormal growth pregnancies and in 50% of pregnancies without growth disturbances. Between discordant growth pregnancies, only all TTTS cases had unequal shared territories and neonatal weight discordance more than 20%. There were 3 cases of severe early morbidity and 6 babies died during the early neonatal period, most in relation to mayor malformations. Conclusions: Placental characteristics are closely related to perinatal outcome, mainly with the presence of TTTS and fetal growth disturbances. Prenatal identification of these characteristics in this group of pregnancies may change parent counselling as surveillance and intrauterine therapy program. 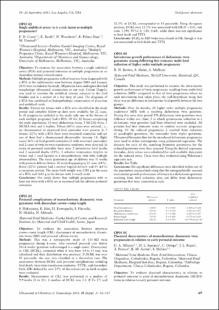