Giant aneurysms have been treated with endovascular approaches like general, balloon-assisted and stentassisted coiling, and flow diverter stent-assisted techniques. Few cases have been reported to be treated with both normal and large coils. Despite the mass effect, an adequate revascularization has been reported. An initial use of these coils is being reported in the current study. This is a case which has been successfully treated using a stent-assisted coiling with both small and large coils i.e., Penumbra Coil 400 (Penumbra, Inc., Alameda, California). 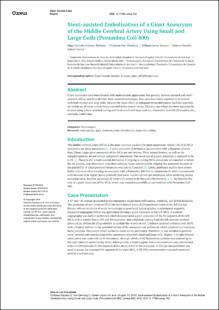