Antidepressant use during the gestational period remains a controversial issue. The objective of this study was to appraise the quality of the available clinical practice guidelines (CPGs) that includes recommendations for antidepressant use during pregnancy. We systematically searched for documents published between January 2000 and September 2010 in MEDLINE / TRIP database and on clearinghouses and main scientific societies websites. Four appraisers evaluated each guideline using the Appraisal of Guidelines for Research and Evaluation tool (AGREE II). Intra-class correlation coefficients (ICC) with 95% confidence intervals (CI) were calculated as an overall indicator of agreement. Twelve CPGs were included from a total of 539 references. Only two guidelines were specifically addressed to pregnant women. The overall agreement among reviewers was high (ICC: 0.94, 95% CI: 0.86-0.98). The mean scores and standard deviation (SD) for each of the AGREE II domains were: scope and purpose: 84.4% (12); stakeholder involvement: 67.4% (29.8); rigor of development: 68.6% (19.8); clarity and presentation: 83.4% (17.4); applicability: 44% (37.3); and editorial independence: 62.1% (30.4). After standardizing the scores of the 12 guidelines, 5 were considered as being “recommended”, 5 as “recommended with modifications, and 2 as “not recommended”. Among the five recommended guidelines, two were specifically conceived to the gestational period. CPGs containing recommendations for antidepressant use during pregnancy were of moderate to high quality. Future guidelines should take into account the observed drawbacks in some domains, and specifically focus a more in depth approach of depression during pregnancy 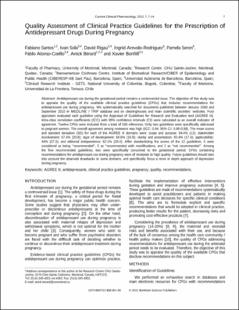