Aplastic anemia (AA) is a rare but serious disease that affects hematopoietic stem cells and is characterized by pancytopenia and a hypocellular bone marrow. It can be a hereditary or acquired condition. Acquired AA has an incidence of 2 per million per year in Europe, but the incidence is two to three times higher in Asia. In Latin America, there is little epidemiologic data on this disease. The most important treatments for AA are bone marrow transplantation and immunosuppressive treatment with antithymocyte globulin and cyclosporine. But access to these treatments is restricted in some areas of Latin America. At the American Society of Hematology (ASH) Annual Meeting in 2016, representatives of the Hematology Societies of Latin America, with the support of the ASH International Program, met to discuss possible collaborative efforts. Everyone agreed that lack of reliable information is one of the main barriers to designing significant clinical trials for the region; therefore, starting a registry of hematologic diseases for the region has become a main goal of the group. In April 2017, at the ASH Highlights meeting in Latin America, AA was selected as the first disease that would be used to begin the collaborative action. National hematology societies of Argentina, Bolivia, Brazil, Chile, Colombia, Costa Rica, Paraguay, Peru, Uruguay, and Venezuela have made a commitment to help develop the Latin American Registry for Aplastic Anemia (LARAA). 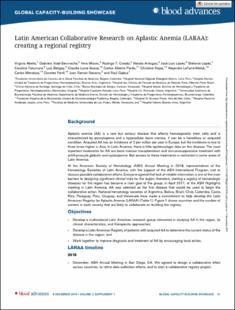