OBJECTIVE Intrinsic third ventricular craniopharyngiomas (IVCs) have been reported by some authors to “pose the greatest surgical challenge” of all craniopharyngiomas (CPAs). A variety of open microsurgical approaches have historically been used for resection of these tumors. Despite increased utilization of the endoscopic endonasal approach (EEA) for resection of CPAs in recent years, many authors continue to recommend against use of the EEA for resection of IVCs. In this paper, the authors present the largest series to date utilizing the EEA to remove IVCs. METHODS The authors reviewed a prospectively acquired database of the EEA for resection of IVCs over 14 years at Weill Cornell Medical College, NewYork-Presbyterian Hospital. Preoperative MR images were examined independently by two neurosurgeons and a neuroradiologist to identify IVCs. Pre- and postoperative endocrinological, ophthalmological, radiographic, and other morbidities were determined from retrospective chart review and volumetric radiographic analysis. RESULTS Between January 2006 and August 2017, 10 patients (4 men, 6 women) ranging in age from 26 to 67 years old, underwent resection of an IVC utilizing the EEA. Preoperative endocrinopathy was present in 70% and visual deterioration in 60%. Gross-total resection (GTR) was achieved in 9 (90%) of 10 patients, with achievement of near-total (98%) resection in the remaining patient. Pathology was papillary in 30%. Closure incorporated a “gasket-seal” technique with nasoseptal flap coverage and either lumbar drainage (9 patients) or a ventricular drain (1 patient). Postoperatively, complete anterior and posterior pituitary insufficiency was present in 90% and 70% of patients, respectively. In 4 patients with normal vision prior to surgery, 3 had stable vision following tumor resection. One patient noted a new, incongruous, left inferior homonymous quadrantanopsia postoperatively. In the 6 patients who presented with compromised vision, 2 reported stable vision following surgery. Each of the remaining 4 patients noted significant improvement in vision after tumor resection, with complete restoration of normal vision in 1 patient. Aside from the single case (10%) of visual deterioration referenced above, there were no instances of postoperative neurological decline. Postoperative CSF leakage occurred in 1 morbidly obese patient who required reoperation for revision of closure. After a mean follow-up of 46.8 months (range 4–131 months), tumor recurrence was observed in 2 patients (20%), one of whom was treated with radiation and the other with chemotherapy. Both of these patients had previously undergone GTR of the IVC. CONCLUSIONS The 10 patients described in this report represent the largest number of patients with IVC treated using EEA for resection to date. EEA for resection of IVC is a safe and efficacious operative strategy that should be considered a surgical option in the treatment of this challenging subset of tumors. 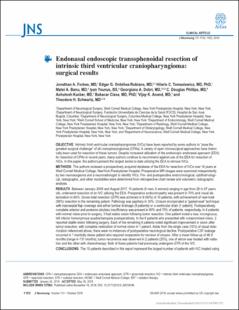